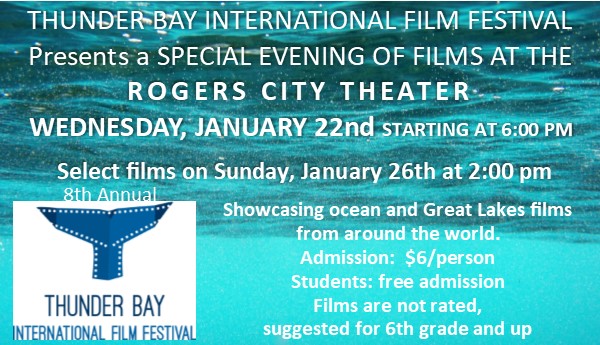 A special evening of films selected from the Ocean Film Festival will be screened at the Rogers City Theater as part of the 8th Annual Thunder Bay International Film Festival. Join us on Wednesday, January 22 starting at 6:00 pm for this special screening of films. The Thunder Bay National Marine Sanctuary is bringing the world of cinema to northeast Michigan with over 60 films scheduled throughout the weekend. Represented, are films from around the world with a focus on the oceans and the Great Lakes. Check out the films and learn more by selecting the links provided. An additional screening of more selected films from the weekend of films held in Alpena will be screened at the Rogers City Theater on Sunday, January 26th starting at 2:00 pm