The Rise and Fall of Allied Paper 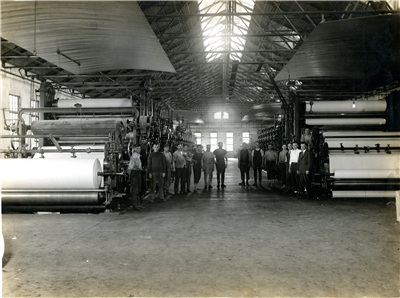 Jeremy Winkworth presents the little-known history of Allied Paper, one of Kalamazoo’s most important industries from 1921 to 1988, as part of the Sunday Discovery Series. Allied Paper was incorporated in Kalamazoo during 1921, when three local paper companies merged. The new company became one of the top producers of book paper in the nation. Allied Paper was successful and profitable through the early decades, helping Kalamazoo get through the Great Depression of the 1930’s. By 1967, Allied Paper was the second largest employer in the City of Kalamazoo. The company continued to expand and grow into the 1970s even as it was bought several times. Unfortunately, small-sized equipment, old facilities, PCB pollution, and depletion of local forests all increased costs to the point where the Kalamazoo mills were no longer profitable. Cutbacks and closures followed. After 67 years, Allied Paper ceased to exist in 1988, leaving PCB pollution that the EPA and the State of Michigan are still cleaning up in 2019.
More Information

The Kalamazoo Valley Museum features exhibits on science, technology and the history of Southwest Michigan. General admission is free.