SMART TOWNS: The Story of the USS Indianapolis 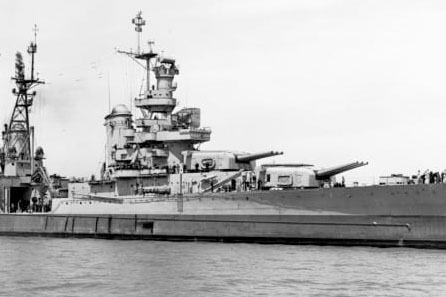 Special guest: USS Indianapolis survivor Dick Thelan (health permitting). WWII historian Larry Martin will discuss the tragic story of the USS Indianapolis. In July 1945, the Indianapolis was on a secret mission to Tinian Island to deliver components of the atomic bomb -- the same bomb dropped on Hiroshima a few weeks later, leading to the end of WWII. After delivering the secret cargo, the Indianapolis was struck by a Japanese torpedo on July 30. The explosion caused the ship to sink within twelve minutes. Of the 1,200 men on board, 300 died when the ship sunk. The remaining men were forced into the shark-infested Philippine Sea. Hundreds perished from starvation, dehydration, salt poisoning, and shark attacks. The sinking of the USS Indianapolis was one of the worst naval disasters in history. Larry’s interest in WWII history and his passion for gathering and sharing the stories of the men and women of the war sparked the creation of the "In Their Own Words" project. The project helps educate new generations about the fascinating and unique history of WWII and fosters an appreciation for the hardships endured by all war veterans. Smart Towns is a lifelong learning program led by local educational organizations. The Smart Towns partners include Rochester University, Oakland University, the Rochester-Avon Historical Society, the Rochester Hills Museum at Van Hoosen Farm, Meadow Brook Hall, and Ascension Providence Rochester Hospital. Together the Smart Towns partners provide a unique series of programs exploring one theme or topic per year. Lectures are presented by experts in their fields of study. The theme for 2020 is “Events that Changed the World.” A complete list of Smart Towns programs is available at smarttowns.rhpl.org.