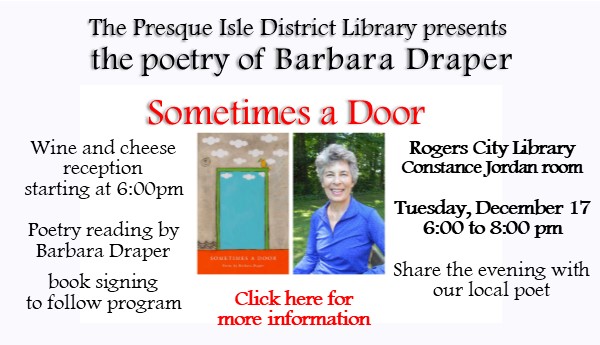 "Sometimes a Door" is Barbara Draper's first book of poems. With her passion and concern for the natural world, she uses imagery and words to express the meaning in the family and place she came from, and takes us on her search for a life more true to herself. A graduate from Rogers City High School, (1964), she earned a BA from Michigan State University and an MBA from University of Michigan. After a career in banking, she had fun exploring many new things including working for a summer as a nature interpreter on Isle Royale National Park, to driving the pecan sweeper at Koinonia Farm in Georgia. She currently lives in Minneapolis and her poems have appeared in Poetry East, Potomac Review, Rust + Moth and Sow's Ear. Her reviews acclaim her as a talented poet, "Such a quiety assurance, such mature knowledge! There's a brilliance in the way Draper juxtaposes scenes of every day, in all its happiness, sadness, and challenge, with poems of conscience and concern for the survival of the planet". Thomas R. Smith, author of Windy Day at Kabetoma and The Glory.