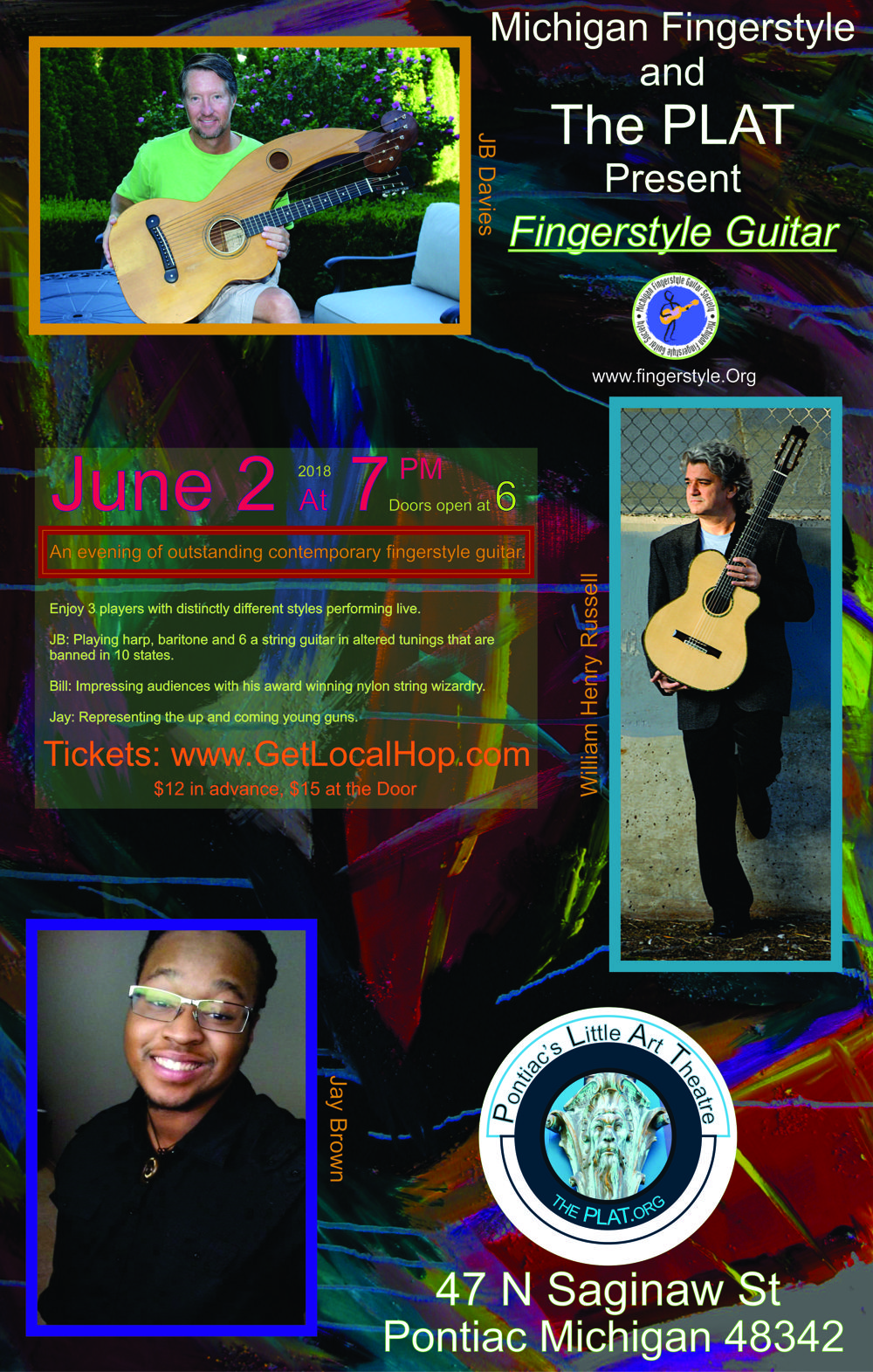 An evening of outstanding contemporary guitar. Our Artists Are: JB Davies (www.JBDavies.com) has played guitar since 1976. After playing in various bands and in a pop/rock duet throughout his college days at MSU, he quit playing entirely until seeing Leo Kottke in concert in the summer of 1998. Inspired by Leo’s sound and method, he decided to exclusively pursue the "finger-style" technique. The finger-style technique is characterized by manipulating the strings with your fingers only (no picks!), utilizing a steel string guitar, which is more often than not in an alternate tuning. The technique incorporates unusual practices including percussive slaps on the guitar, tapping (left hand plays independent melody while right hand executes bass notes), two hands over the top of the guitar, etc. JB has studied with John Stropes (past President of the Milwaukee Classical Guitar Society, Chairman of the Guitar Department of the University of Wisconsin Conservatory of Music and transcriber for Michael Hedges, Leo Kottke, Billy McLaughlin, Alex DeGrassi, and others), Billy McLaughlin (noted finger-stylist who specializes in the tapping technique), Preston Reed, Don Ross (two time winner of the National Fingerstyle Guitar Championship) and several other guitar heroes through the magic of Skype. JB’s performances usually feature “heavy mental” pieces performed on a harp guitar, baritone guitar and good ‘ole regular six string guitar in alternate tunings. He performs extensively on a local basis and on multiple occasions has been one of the featured performers at the Healdsburg Guitar Festival in Healdsburg California. JB is Co-Founder of the Michigan Fingerstyle Guitar Society (www.Fingerstyle.Org), a non-profit organization that promotes the appreciation of fingerstyle guitar through concerts, workshops and goodwill. Bill Russell is an award winning classical / fingerstyle guitarist. Three times he has placed in the top five at the Indiana Fingerstyle Guitar Competition and is the 2009 Gamble Rogers Fingerstyle Guitar Champion. “Bill” received a Bachelor’s Degree in Music Performance from the Boston Conservatory of Music and a Master’s Degree in Music Performance from Florida State University. As well as being a classically trained musician he is also an established composer and arranger. Performing in countless churches, cafes, libraries, concert halls and festivals he has honed his craft while entertaining audiences for over 30 years. Bill has perfected his own distinctive solo guitar style that bears a deeper understanding of the music conveyed through an impeccable classical technique. He enters into every performance with this J.S. Bach quote in his heart and mind: “The aim and final end of all music should be none other than the glory of God and the refreshment of the soul.”. Jerome (Jay Brown) Espy I am Jay Brown with the harmonic guitar sounds, love of music and mover of vibes with an ear for anything fingerstyle. In my music, I hope to cultivate a funk and melodic tour of emotion and great music, while at the same time giving you something to groove and cry to. I first started out playing at the age of 14. Having always had an interest for anything musical (growing up with gospel, smooth jazz, R & B, Neo soul grooves as well as my grandmothers piano) it was only natural that I drifted into the beautiful and melodic tones of guitar. Fingerstyle guitar has brought me peace in times of stress and happiness - I hope to pass that along in my playing. BEER AND WINE CASH BAR